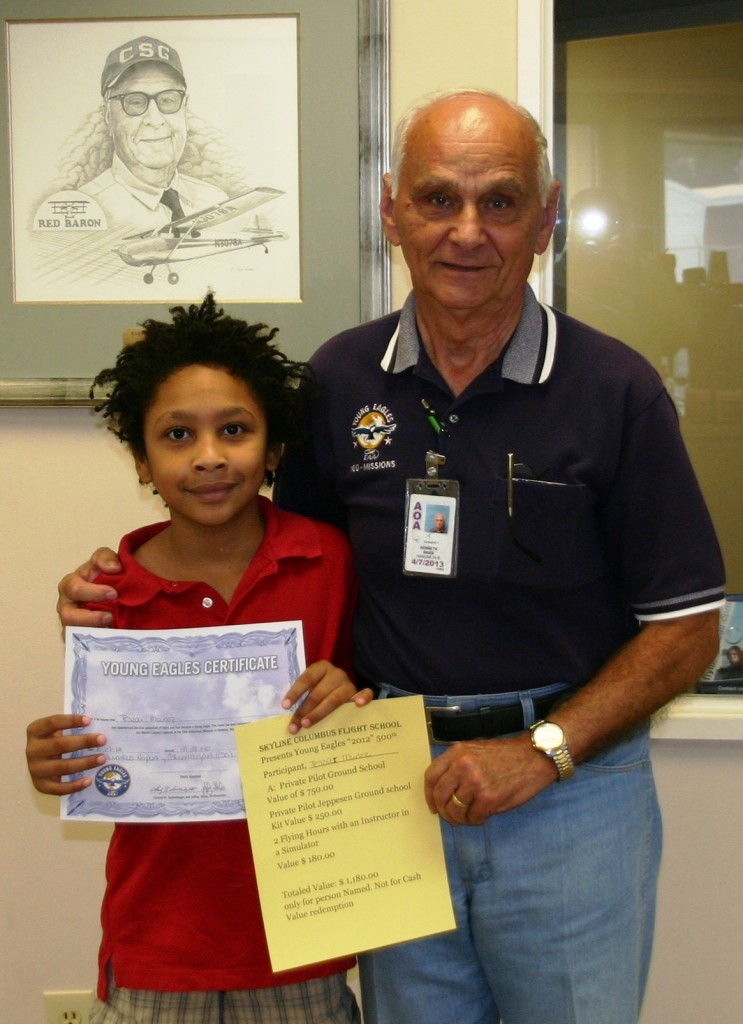 During its October Young Eagles Rally on October 27, Chattahoochee Valley EAA Chapter 677, based at Columbus Airport (CSG) in Columbus, Georgia, exposed 43 children to general aviation flying and reached its goal of 500 Young Eagles carried for the year – more than double the 248 flown in 2011.

The real thrill came when Young Eagle number 43 for the day, nine-year-old Teszai Munoz of Phenix City, Alabama, returned from his flight and was greeted by a crowd of cheering EAA 677 volunteers, many of whom asked to take his picture as he climbed out of the plane. Once indoors, Teszai received a special certificate commemorating the occasion, a gift certificate for an introductory flight training package, and had more photos taken. 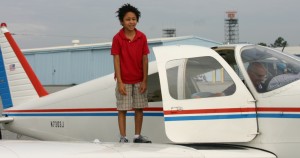 A home-schooled student, it was Teszai’s second flight as a Young Eagle with EAA 677. “I have a big future ahead of me,” he announced when told of the significance of his flight and what he would receive. “This is just wonderful,” Teszai’s mother, Cherylann Wilkinson, said.

The pilot on the milestone flight, Ken Sines, is no stranger to Young Eagles. Teszai was Ken’s 1,201st Young Eagle, cementing him at the number one position among all Young Eagle “Flight Leaders” in Georgia. He shied away from taking any personal credit for the accomplishment, saying, “If you live long enough, you get to be part of a lot of good things.”

The flight training package donated by Skyline Columbus, the only comprehensive flight training facility in the region, includes ground school, all necessary text books, and two hours in a flight simulator with an instructor – a retail value of nearly, $1,200. Todd Shellnutt, owner of Skyline Columbus and past president of EAA 677, provided the prize to encourage the winner to pursue pilot certification and perhaps fly as a Young Eagles pilot in the future. 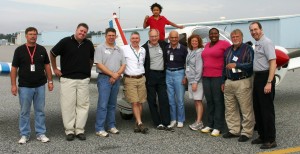 Chattahoochee Valley EAA 677 poses with it 500th Young Eagle of 2012, Teszai Munoz of Phenix City (standing on wing in back of group).

“We’re proud of Teszai and Ken, but this was a team effort,” said EAA 677 president Ernie Kelly. “Without our ground and pilot volunteers, and the support of Skyline Columbus, Flightways Columbus – whose facilities we use, and the Columbus Airport, none of this would be possible.”

About Young Eagles
For details on EAA 677’s monthly Young Eagles Rallies, at which local children between the ages of 8 and 17 are given introductory flights by Columbus-based private pilots, please go to the EAA 677 website, or send an email to [email protected].

About EAA Chapter 677
The Chattahoochee Valley Chapter 677 of the Experimental Aircraft Association is one of more than 1,000 local chapters of EAA.  EAA 677, based at Columbus Airport (CSG) in Columbus, Georgia, is a not-for-profit membership organization whose major activities include its Young Eagles Rallies on the last Saturday of each month, annual support for the Thunder in the Valley Air Show, introducing adults to flying on International Learn To Fly Day and through Eagle Flights, and participating in the major national EAA events: Sun’n Fun and AirVenture.  For more information about EAA 677, visit http://www.677.eaachapter.org or email [email protected].

« The Honor Tree: A photographic Tribute to our Nation’s Soldiers
Reading of “The Polar Express” @ FDR’s Little White House »