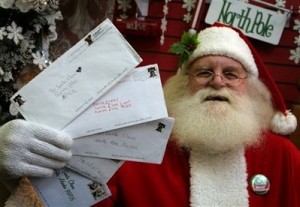 ANCHORAGE, Alaska – Wide-eyed children around the world will be hearing from Santa’s “elves” at the North Pole after all.

During Christmas seasons for decades, these dedicated elves responded to thousands of letters addressed to “Santa Claus, North Pole.”

All that was ending with a U.S. Postal Service decision to discontinue the program based in the small Alaskan town amid privacy concerns.

A reversal of the Postal Service move was announced Friday.

The letters will now be answered under tightened privacy rules implemented nationwide by the Postal Service in response to security concerns that arose in a similar program in Maryland last year.

« Georgia scores an “F” for Premature Birth Rate
iVillage: 15 Stress-Less Ways to Shop with Kids During the Holidays »