Minor Charcters (can be  either male or female)
Ephraim(Eppie); a  paperboy (14-16)
Howie(Hettie); a postman
Eben(Eshter); a coachman
Levi(Laurey); a stationmaster
Mr.(Miss) Titus; a  farmer
Chester(Hester) Upshaw; a  salesman
Judson Moffet; a neighbor of the Wittings 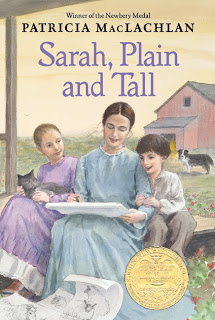 The time: The early 1900s
The Place: a farm in  Kansas/ a house in Maine
Synopsis: Jacob Witting, a Kansas farmer and  widower, with two
children, Anna and Caleb, places an ad in the newspapers  seeking a wife. He
receives a letter from a Sarah Wheaton of Maine who says she  will visit the
family for a month to see how things work out. The story is  narrated by adult
Anna. The story unfolds in flashback on that month.