Maybe one day we will have the courage to meet the people who are living right next to us. ~ Nadia Tadros, resident of Jerusalem

I recently had the opportunity to screen the newest National Geographic film, Jerusalem IMAX 3D, a unbiased documentary that unveils the ancient city of Jerusalem from four perspectives–Jewish, Muslim, Christian, and secular.

For 45-minutes I sat riveted in my seat. The film is an awe-inspiring, breathtaking aerial tour of the Old City of Jerusalem. I learned how it became the center of the world for three major religions. With the use of Computer-generated imagery (CGI), they showed me what the city would have looked like 1,000’s years ago. And I learned more about what makes this city so fascinating for historians and archeologists alike. 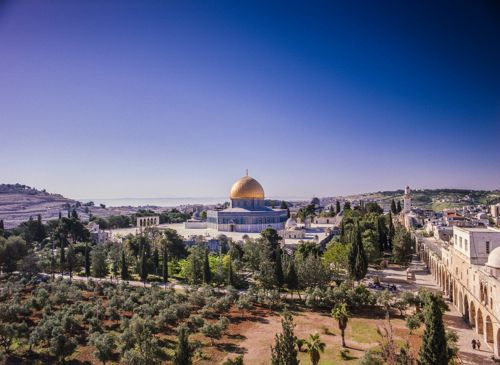 Al-Masjid al-Aqsa, meaning “The Furthest Mosque” is one of the three most important sites in Sunni Islam. At its centre is the Dome of the Rock. The entire area takes up one sixth of the walled city of Jerusalem.

Unlike most documentaries that focus on politics and religion, this film follows three teenage residents — Farah Ammouri, a Muslim, Nadia Tadros, from a Greek Orthodox and Catholic family, and Revital Zacharie, a Jew. Through the eyes of these young girls, I learned what it meant to call Jerusalem home, and I experienced the major celebrations and events that mark the high points of a year in the life of the city. By the time I walked out of the theatre, I was both inspired and challenged by the hope and the common heritage these girls share.

Several days later, I had the pleasure of speaking with the film’s Producer Taran Davies, (Journey to Mecca, Afghan Stories). During our interview, he shared some of the huge challenges his team faced to gain access to the many sacred places (including a rare view of the rock at the center of the Dome of the Rock) and the restricted airspace above the Old City, which is usually a no-fly zone. Jerusalem’s iconic Citadel (now the Tower of David Museum of the History of Jerusalem) is a fortress with archaeological findings spanning over 2,000 years.

Mr. Davies: Jerusalem literally is one of the most fought over pieces of land on earth. I’m fascinated that it has survived and to this day remains loved and beloved. I am drawn to learning more about how such a small and ancient city has such a draw over our lives,  whomever we are.

Why do the Christians so love it? And to see it from the perspective of the Jews and to see the very bedrock that is the most sacred spot on earth. It is the closest place to God historically, yet it is a living, vibrant city. I am personally drawn to places of faith. It’s so exciting to find a place that is sacred to so many people. Tens of thousands of Jewish pilgrims congregate at the Western Wall during Passover.

MMoms: How did you gain access to all of these amazing places?

Mr. Davies: Making these sorts of films is madness. It was so complex. People have been trying to film Jerusalem in IMAX® format for years, but the instability and complexity of the region has made it very difficult. We had to get to know all the key people in and around Jerusalem. It took time and a million cups of tea. We met with all of the relevant government ministries, including the Israeli security forces and the Supreme Islamic Counsel. The timing was just right, and they let us film.

Filming low altitude aerials over the Old City had been prohibited for 20 years. On the day before we filmed the low altitude aerials over the Old City, we did interviews with the Jewish and Arabic press so the local population would know what was going on when they saw our helicopter with the strange-looking cameras flying overhead, escorted by two Israeli Air Force helicopters. 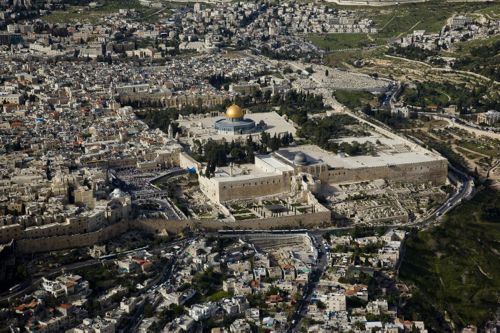 A rare aerial view of Jerusalem’s walled Old City and the Mount of Olives, sacred ground for half of the world’s population.

We arranged to be locked overnight inside the Church of the Holy Sepulchre. We went down below the church to film the ancient graffiti left by early Christians over 1,700 years ago. It was amazing. This could be Golgotha, Christianity’s most holy shrine. We were able to explore it and see what the rock actually looked liked.

We were allowed to film the Ceremony of the Holy Fire. It was crazy. We had to get permission from all six churches that have custodial authority (The Greek Orthodox, Armenian Apostolic, Latin Catholic, Syrian Orthodox, Egyptian Coptic, and Ethiopian Orthodox) Just to run a power cable to a single light required permission from each church body! 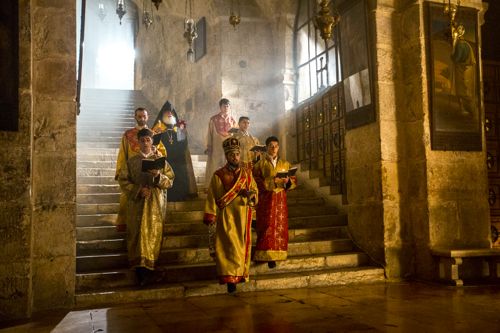 A group of Armenian Apostolic priests descends the stairs to the Chapel of St Helena in the Church of the Holy Sepulchre. Tradition holds that Helena, mother to the Emperor Constantine, discovered remnants of the True Cross here in the 4th century C.E. (AD) during the construction of the original church.

MMoms: What made you decide to have three girls of different religions narrate the film.

Mr. Davies:  People who go to Jerusalem, end up going to specific places and miss so much. Depending on your religion and the time of year, you will see something completely different from another person. We wanted to experience it all. We were particularly interested in learning from the kids who inhabit this city, who live and breath it, and play in it. We wanted to get their perspective on how the city is so meaningful and important to them.

By following the three different girls, our audience can experience Jerusalem from three different perspectives. Daniel Fergyson (writer / director) asked each girl to take him to the most important places to her in Jerusalem and share what those places mean to them. Each girl walked down the same street, but had a different story. They have such different backgrounds and outlooks. 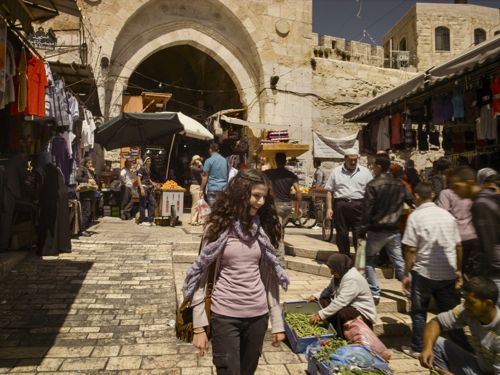 MMoms: What did you learn during the process of making the film?

Mr. Davies: The more I learn, the less I know. The making of this film was a discovery of humility. We have opened a small window to millions of stories. Everything in the film is a discovery of some sort.

The geography wasn’t altogether clear to me. The proximity of the sacred places so close and on top of each other was an eye opener. Exploring the geography was fascinating. Different rivers of festivals have crisscrossed each other on these ancient cobblestone streets for 1000’s years, yet they remain separate. The three girls taught us so much. Every single element was so new to me. That is what draws me to it. You have to be curious and want to learn more. One of nearly 2,000 archaeological sites in Jerusalem.

MMoms: What do you want young people to take away when they watch the film?

Mr. Davies: At one level it’s really important remind our audience that this is an adventure. It’s a thrill ride. It’s a journey through this important part of the world. An immersive experience. We plunge into the gorge, we fly over the air and explore this place through these three girls.

I hope people will feel as if they have gone to the moon and walk away feeling blessed and fortunate to have gone on this extraordinary journey to this part of the world that we know so little about. I want these kids to meet their peers and contemporaries in this other part of the world. I want them to see how much Jews, Christians and Muslims have in common and be inspired to better understand each other. The girls are hopeful. Nadia summed it up so well at the end of the film to have the courage to get to know your neighbors. Jerusalem residents, Farah Ammouri, a Muslim, Nadia Tadros, from a Greek Orthodox and Catholic family, and Revital Zacharie, a Jew.

MMoms: What would you say to a young person who is considering a career in film making?

Mr. Davies: You have to follow your heart. If you seek adventure and you seek to tell stories, there are many different ways to become a film maker, but its the sort of thing that. The great poet Rilke, says to “…ask yourself in the most silent hour of your night: must I write? Dig into yourself for a deep answer. And if this answer rings out in assent, if you meet this solemn question with a strong, simple “I must,” then build your life in accordance with this necessity…” Your dreams have to start somewhere. I still feel like a 20-year old kid with a little camera going off to Central Asia with a hope and a prayer. 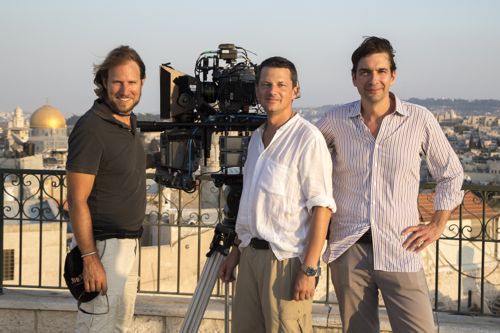 Producers Daniel Ferguson, George Duffield, and Taran Davies faced huge challenges to gain access to sacred spaces as well as the airspace above the holy city, which is usually a no-fly zone.

What to Know If You Go:

Muscogee Moms® (and dads!) is Your Guide to Family Fun. We are here to help you find fun events and activities for your family to do around the Columbus, Georgia Metropolitan Area. More About Us!