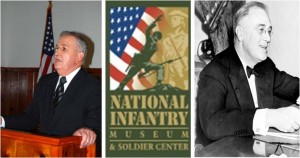 Step back in time this Independence Day weekend

Join President Franklin D. Roosevelt, portrayed by historical re-enactor Robert Prater, as he presents a patriotic speech using portions of the 1941 State of the Union Address.

Robert Prater is a historical re-enactor who embodies the characteristics and voice of the late president, Franklin D. Roosevelt. Robert appears wearing bilateral long leg braces, like FDR wore and enters speaking venues walking with cane and the assistance of a strong “left arm man”.