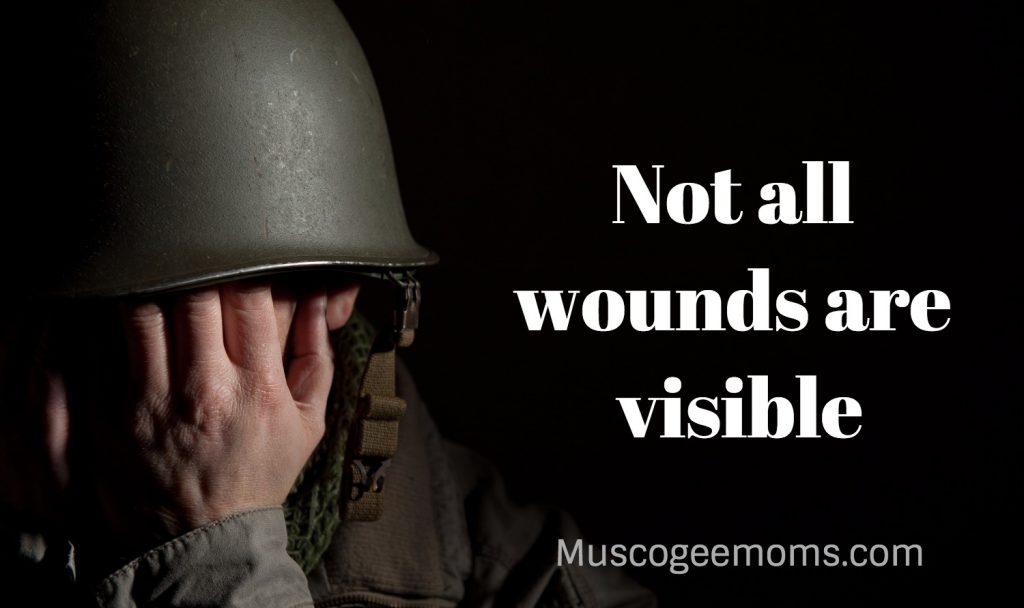 Military Suicide and PTSD: How to Get Your Loved One Help Before It’s Too Late
By Kristin Bentley

Military suicide is a heartbreak that many of us know all too well. After your spouse has served for a number of years, many of those lost are dear friends. The most difficult feelings those left behind have been, Could I have helped if I had known? and Why didn’t I know?

Living a military lifestyle – long deployments in dangerous countries, being stationed far away from family and friends, frequent moves, and high infidelity and divorce rates – can leave many service members and spouses feeling deeply depressed. Many service members who have served on combat deployments know of others who also suffer from PTSD. All too often, they don’t know how to reach out for help and fear being judged or stigmatized. But the consequences of this are sometimes lethal.

Statistics show that approximately 22 veterans commit suicide a day, which is an incredibly high number. The number for active duty and reservists is lower, with four service members lost every three days. However, just one life is a deep loss felt by many.

The Army has the highest number of yearly suicides with a total of 127 lives lost in 2016, according to the U.S. Department of Defense (DOD). The Army National Guard has the second highest rate with 109 lost lives. These two statistics are nearly double those of both the Air Force and the Navy.

“Historically, you were protected from suicide when you went in the Army,” says Dr. Robert Ursano, the director of the Center for the Study of Traumatic Stress at the DOD’s Uniformed Services University. “Rates of suicide were about half of those in the civilian population, and around 2009, they increased to above that of the civilian population and they remain high since then.”

Even though both deployment depression and PTSD can cause symptoms of sadness that lead to suicidal thoughts, CPT Shellie Jervis, PsyD, an Embedded Behavioral Health Officer-in-Charge, says they are quite different disorders.

PTSD specifically occurs after experiencing or witnessing a traumatic event. “At some point thereafter, they may experience unwanted memories of the event, have fear and anxiety that are triggered by similar situations, and may experience nightmares,” says CPT Jervis. “It can also cause depression. Depression related to deployment does not differ from any other depression syndromes except the person may have a significant amount of guilt.” Both of these, she says, can be associated with suicidal thoughts and are treatable with professional assistance.

Depression, defined by Army Chaplain CPT Michael Bielefeld is a state of low self-worth. It includes sleep problems, and losing interest in activities that were previously enjoyable. He suggests encouraging a spouse to seek medical help if depression is suspected. “Ask them directly,” says CPT Bielefeld. “If you both disagree, convince them to have a professional evaluate them for depression. If your loved one agrees that they do think they have depression, have them seek a professional.”

Many service members worry about negative repercussions to their career for seeking help, but CPT Bielefeld says that not seeking help can lead to greater problems for their career and marriage. “At the end of the day, a life saved is well worth any difficulties faced to get better,” he explains. “Soldiers need to value their life enough to understand that asking for help actually shows signs of courage and strength, rather than weakness.&quot;

A person can’t expect to run their vehicles without ever getting an oil change, the tires rotated, and replacing worn out belts and hoses, explains CPT Bielefeld. Likewise, a person cannot neglect getting physical “tune-ups” from a physician or mental and emotional “tune-ups” from a
counselor or therapist. He says that even if we feel like our lives are going well, we should still seek advice and validation from a professional.

“If you absolutely worry about your service member’s career, they should see a chaplain, who has 100 percent confidentiality,” CPT Bielefeld advises. Chaplains offer more than spiritual guidance, they also look after every service member’s general well-being and are a valuable resource to utilize.

Another confidential resource is a Military and Family Life Counselor (MFLC). These are assigned to specific brigades and at the installation level.

You know your service member best, says CPT Bielefeld. So you can detect any small changes in their behavior that are easily hidden while they are at work. Therefore, you are the first line of defense against military suicides and other consequences of any kind of mental illness.

“Be engaged with your service member’s unit and ensure you know how to reach the leadership if you ever have a concern,” he says. “We know plenty of stories where the spouse intervenes by informing the unit leadership of their concerns. and it results in lives saved.”

« The Holidays Are Coming – Is Your Vehicle Ready?
Giving From the Heart this Holiday Season »