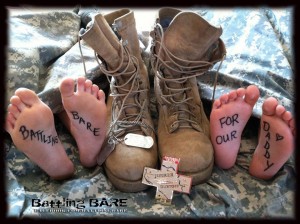 Gutsy military wives are going topless to raise awareness for a debilitating condition affecting their families.

Did you know… One in five veterans of the Iraq and Afganistan Wars suffers from post-traumatic stress disorder (PTSD), a condition that can lead to violent mood swings, alcoholism and suicide. And they aren’t getting proper medical treatment. At least that’s what several desperate wives of vets are saying.

In a recent article on the HuffingtonPost.com, military wife Ashley Wise shares how she launched an initiative to draw attention to this condition. She was inspired when her own husband returned from his second tour of Iraq in an unrecognizable state.

Wearing nothing but her husband’s camouflage cap and with his assault rifle perched above her head, Wise bore her naked torso with the following vow inscribed in pen, “Broken by battle, wounded by war, my love is forever. To you this I swore, I will quiet your silent screams, help heal your shattered soul, until once again, my love, you are whole.”

Within minutes of posting the image to Facebook, the image went viral, grabbing the kind of focus that she believes PTSD is sorely lacking. And others are taking notice, including us.

Fort Benning military families dealing with PTSD can get help at the Pastoral Institute here in Columbus. As part of the Pastoral Institute’s partnership with a national research program funded by the McCormick Foundation, the majority of clinicians on staff are trained in the use of EMDR which is an evidence-based therapy for Post-Traumatic Stress Disorder. EMDR has been highly recommended by both the U.S. Departments of Defense and Veterans Affairs due to its positive results.

If you or a loved one have been seriously affected by a traumatic event, then contact the Pastoral Institute at 706-649-6500 to determine if EMDR treatment is right for you.