If you are anywhere in the middle Georgia area, stop by and visit Ocmulgee Mounds National Historical Park in Macon. My son and I had the opportunity to explore this prehistoric Native American site on a recent school field trip.

Ocmulgee is one of the few places in the southeast with an archaeological record dating back to Paleo times — it has been inhabited by humans for at least 17,000 years! It takes about two minutes to walk up the hill from the Visitor Center to reach the nearby Earth Lodge.

The 702-acre park offers access to several Mississippian-era mounds. The site is considered sacred to members of the Muscogee (Creek) Nation as well as to other federally recognized tribes (such as the Cherokee, Chickasaw, Choctaw, and Seminole).

If you’ve never visited before, it’s best to make a morning or afternoon of it. The weather was still warm, so we went early in the day. The park has six miles of trails but most groups stick to the one-mile round trip path to the Great Temple Mound. This trail goes by the Earth Lodge, over the railroad cut, and past the site of a 19th-century trading post. 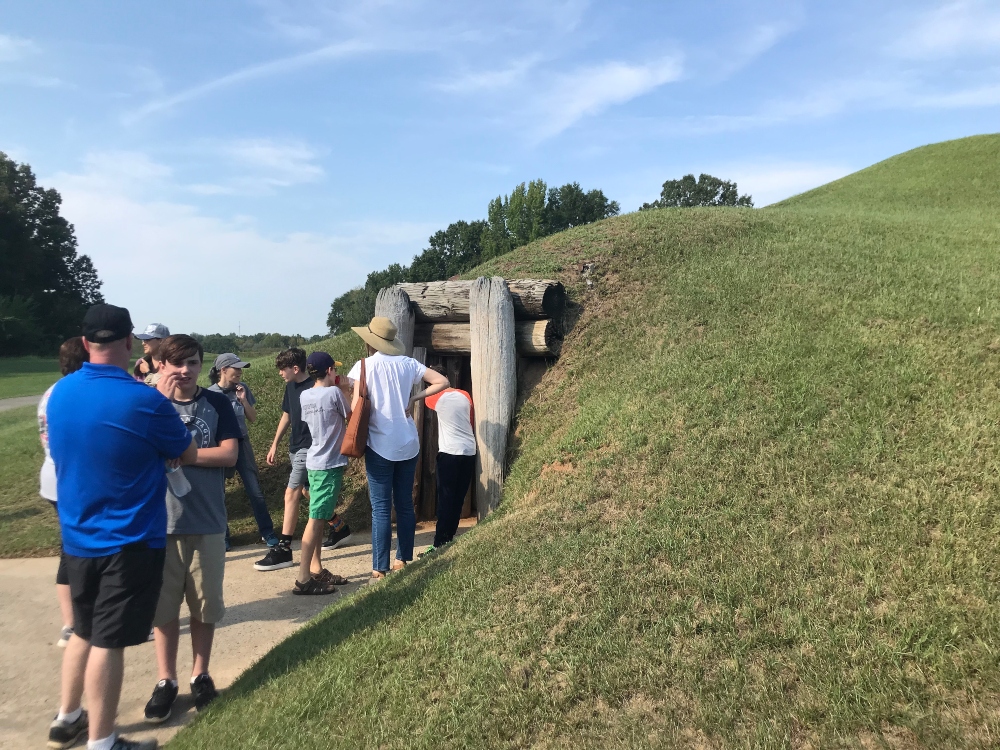 In the 1930s, Ocmulgee was the site of the largest ever archaeology dig in American history with over 800 workers.

The Earth Lodge was once a council or ceremonial chamber used by of the Mississippian people between 900 – 1250 AD. The walls and ceiling were reconstructed in 1937. However, the floor is original and was constructed by the Mississippian people in 1015 AD. The floor includes a bird of prey effigy platform with three seats, a depressed fire pit, and forty-seven “raised bench” seats that extend around the circular wall.

The entrance is low, and we had to hunch over to enter the chamber. Only 25 students can fit inside at a time. 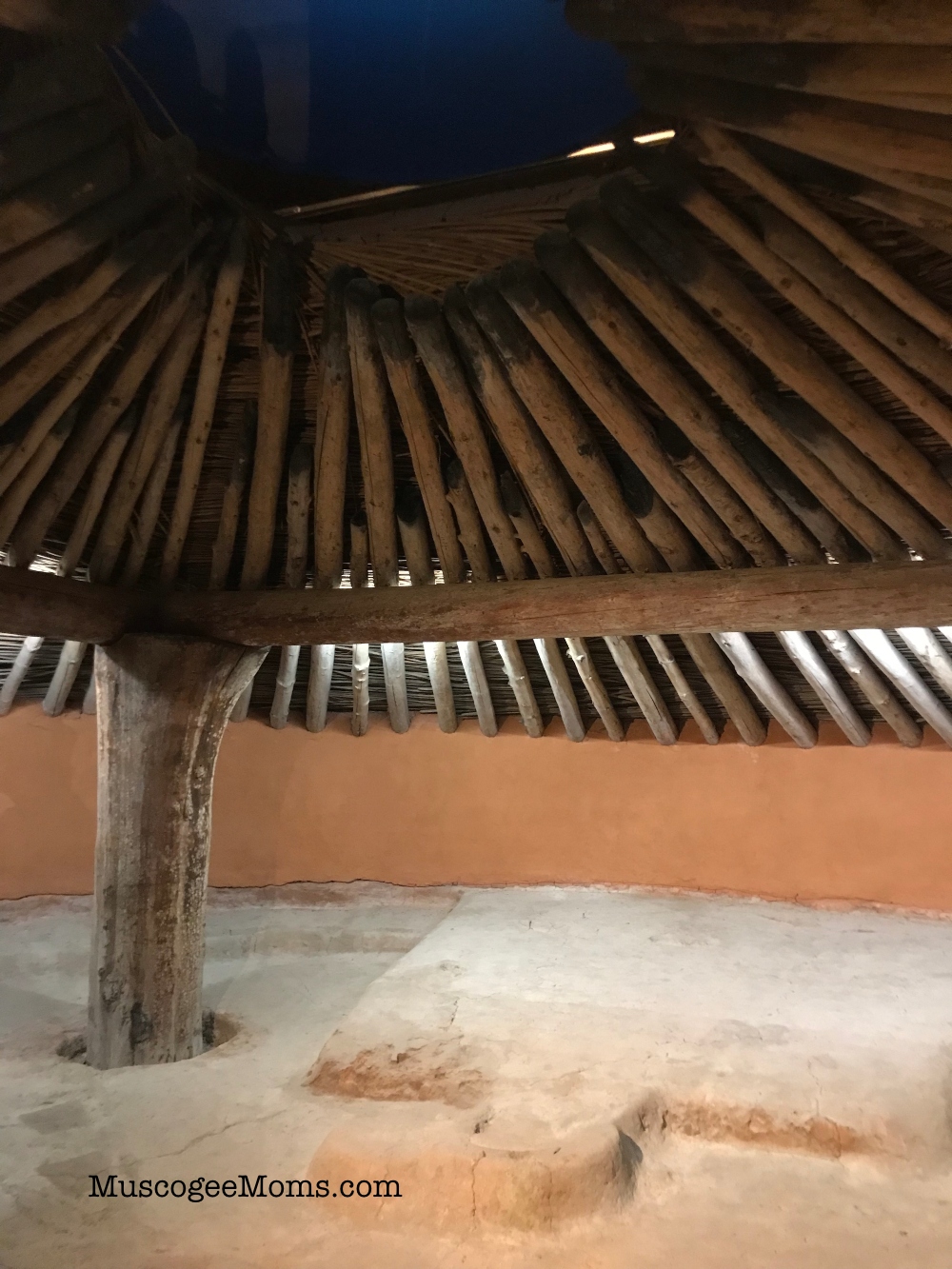 The original floor inside the Earth Lodge has been carbon-dated to more than 1,000 years ago.

We climbed the steps to the top of the five-story Great Temple Mound — a major earthwork built by over a thousand years ago. From the top, you can see the Funeral Mound, the Lesser Temple Mound and a great view of Downtown Macon. 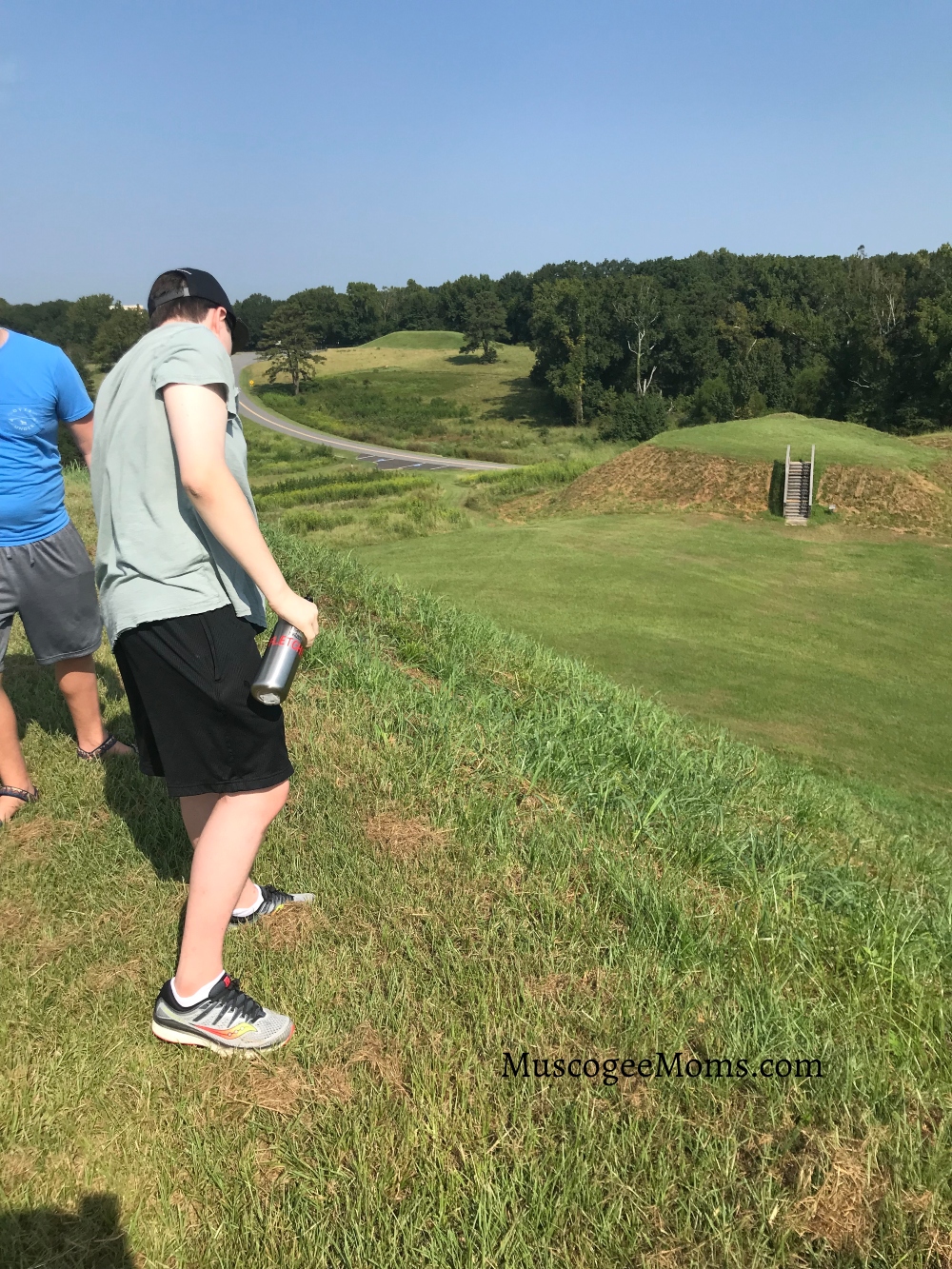 The Lesser Temple Mound (seen in the foreground from the top of the Great Temple Mound) is the second-largest mound in the park. Very little is know about these mounds, other than they were most likely used for religious and ceremonial purposes.

After exploring the grounds, we spent some time in the Visitor Center and Museum. The museum houses hundreds of original artifacts found during an early 1930s archeological excavation of the site.

We also watched a 15-minute orientation film in the small theatre. The film covers all of the historic time periods and events that took place in the park, including Civil War battles and the excavations of the 1930s.

What to Know if You Go

Wear sturdy shoes and bring water. Plan to spend at least 30-45 minutes at the Visitors Center and an additional hour or so exploring the mounds. There are picnic tables adjacent to the parking lot for lunch if you prefer to make a day of it.

Hours: The park is open from 9 AM to 5 PM daily, except when closed for Christmas and New Year’s Day. Admission is free.