A Day Out at Paradise Pumpkin Patch

Some pumpkin patches are designed primarily for fall photos with children carefully pointing to their choice of gourd so as not to dirty their smocked or monogrammed finery.  The opposite of that is Paradise Pumpkin Patch.  About 14 miles from downtown Eufaula, Alabama, Paradise Pumpkin Patch is full of all kinds of imaginative farm fun.  Sure, they have the typical corn maze and hay rides that you’d expect for your fall entertainment but that is only the beginning.

We visited Paradise Pumpkin Patch on a Saturday afternoon.  It’s a large farm in a very rural area, but we had no trouble finding it.  My kids were excited as soon as we parked since we were right next to the corn maze and a pasture full of cows, buffalo, A ZEBRA, watusi, and I’m not even sure what else.  A friendly camel named Charlie stuck his neck through the fence to greet people.  I was paranoid about him spitting at us, like they do in every video I’ve ever seen involving a camel, but he was just happy to let kids pet him and even happier to let people feed him.  They sold styrofoam cups of animal food for $1. We paid our $12.50 per person entry fee (kids under 2 are free) plus $5 for a pony ride.  It seemed a little pricey at the time, but we soon realized that it was well worth the cost.

Around a small barn were even more animals to feed.  The kangaroo was a little snooty, but the llamas and donkeys were nice.  A fake cow was equipped with some rubber udders and kids took turns “milking” water out of it.  Next was a little maze of hay bales where a choice of many tractor-shaped tricycles was available for racing.  My kids skipped that one as they were intrigued by kids furiously working some old-fashioned hand water pumps nearby.  The pumps were attached to ramps where you placed a rubber duck and then pumped water to race it down to the other side.  My husband and I appreciated the bench placed next to this attraction because our children raced ducks for a ridiculously long time. 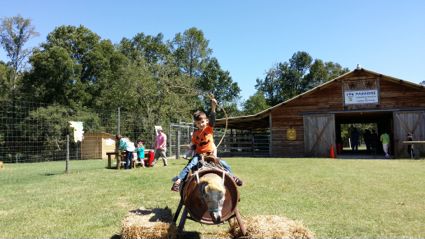 When duck racing finally got old, we moved on to a corral full of ride-on bouncy balls and hobby horses.  The excitement of this was quickly eclipsed by 3 huge bounce houses/slides nearby.  There were no lines at the time and so we got to know the bliss of having inflatables almost all to ourselves. A covered wagon pulled by mules circled around this area too, but the draw of loud bangs followed by cheers led us straight to the “corn cannon”.  No actual corn was involved, rather corn-sized chunks of PVC were loaded into a tube and shot out using an air compressor.  Each person is given a ticket worth 3 turns at this cannon. The goal is to hit a bulls-eye on a large hay bale several yards away.  Winners got either a free pumpkin or hot dog. My 2 year old didn’t like the noise close up so her dad took her to the nearby playground while my son enjoyed using up all 4 of our tickets.

I would definitely advise people to keep a close eye on their young ones here.  Big tractors pulling wagons full of people to and from the pumpkin patch and the parking lot seemed to be everywhere.  One of these tractors pulled the “cow train”.  The cow- themed cars do have seatbelts, but I questioned my parenting judgment when I saw that thing zip out of sight with my 2 year old in tow.  She enjoyed it, but it went faster than I had expected.

One of the most surprisingly popular attractions at Paradise Pumpkin Patch were two gigantic wooden bins full of corn (dried, not creamed).  Kids of all ages had a blast swimming,  jumping and rolling around in corn.  Again, we were thankful for well-placed benches because I think we must have spent at least half an hour watching our children revel in the joys of corn. 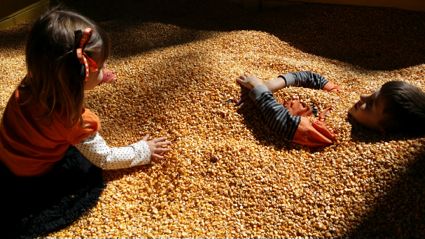 It was starting to get late and I was determined to find a zip line that I had seen signs for.  A path into the woods brought us an enormous tunnel slide at the bottom of which was a low zip line with a rope swing attached.  An attendant walked alongside the rope so that even my 2-year old was able to enjoy it.  She loved the slide even more.  She must have walked up the massive hill 15 times to slide down.  After this we were all exhausted. I looked at my watch and realized that we had been at Paradise Pumpkin Patch for almost 5 hours!

A snack bar and gift shop sell food options like hot dogs, pretzels and cotton candy.  If we had known that we were going to spend all day at the farm, we probably would have packed some snacks and water of our own as well.  We were glad that we had worn comfortable shoes and clothes that we didn’t mind getting dirty.  We left Paradise Pumpkin Patch worn out from tons of fun.  We were so worn out in fact, that after 5 hours, we never even got around to picking out a pumpkin!

Hours: Saturdays and Sundays from 9am- 6pm
weekdays only available for field trips by reservation
Cost: $12.50 per person, kids under 2 free, $10 for seniors 65+