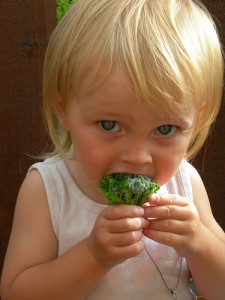 A few years ago I sat up in the middle of the night and woke up my husband.

He sat up, hair wild and eyes unfocused, and said something like “Hhhmmmffff.”

I told him how I’d been doing some thinking, and I had almost concluded that our children may be a type of broccoli.

He stared blankly at me and then laid down and went back to sleep, so I got up and wrote a paper, which I have since lost, but was so full of plausible info that I thought I’d give it another go…

Shortly after having my first child (about five or ten minutes after, probably), I realized that there are at least as many differences as similarities between big people and little ones. By the time I had my second and third children, I was convinced that they are a different species entirely.

So… Although this evidence is not conclusive, I submit the following:

Take a piece of broccoli, and hold it’s little face in your hands, and tell it to go clean its room. The results, I tell you, are too similar to this same scenario with children to be coincidence.

Also, compare the smell that emanates from broccoli and from children, especially when under heat or pressure.

Thirdly, please inspect closely the color, shape and texture patterns on both subjects. Note key places on children like under fingernails and diapers, as well as places they frequent, like cribs and highchairs, that are almost indistinguishable from a piece of broccoli.

And lastly, bear in mind the fact that all children are born with an innate reluctance to eat broccoli that can vary in degrees of severity all the way to downright abhorrence. This distaste for cannibalism further supports my theory.

« “Play with Me, Mommy!”
Five Tips to Recession-Proof Your Relationship »