Sign Up for Our Newsletter: Subscribe
You are here: Home / BLOG / What is bullying? Recognizing signs and symptoms in your child 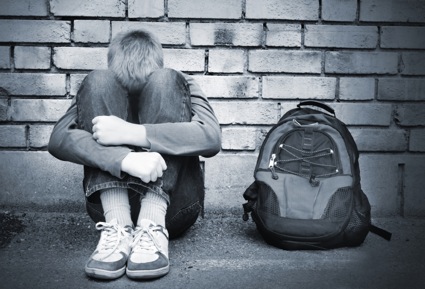 What is bullying? Recognizing signs and symptoms in your child

This blog is part one in a two-part series about bullying. You can read the second part part here, which describes the harmful, long-term effects of bullying as well as actions that parents can take to help their child understand, prevent or stop this behavior from occurring.

In the past year, I saw more than a dozen real-life cases of bullying in my own practice, which were certainly not obvious to parents or even medical professionals at first glance. Reported symptoms ranged from intractable headaches, poor school performance, chest pain, throat pain, and hives. In each of these instances, families wanted referrals to specialists for everything from a cardiology workup, ADHD treatment, ENT evaluation, and allergy testing.

One particular 10-year-old came in as a new patient and reported having pain in her abdomen for almost a year. The previous pediatrician had done a long battery of tests, including x-rays, ultrasound and blood tests and had been treating the child with medicines, but the child was continuing to have abdominal pain. Hence, the parents were frustrated and seeking a new pediatrician.

I got a detailed history from the parents, and then I talked to the child alone. She said she looked forward to the weekends and reported that she did not feel pain on non-school days. I then asked direct questions about her classmates and friends, and it became apparent that she was being bullied at school. When I told the parents about the etiology of the abdominal pain, they were shocked! We were able to report the bullying to the school, and it was handled; within a few weeks, this child’s abdominal pain vanished and she is not on medication any more.

Cases such as these demonstrate how prevalent, how severe and devastating bullying can be for today’s children. In some cases the child realized that he/she was being bullied but was too embarrassed to talk about it; in other cases, the child had no framework or words for it and did not realize that he/she was experiencing bullying.

So, what is Bullying?

Bullying is unwanted, aggressive behavior among school-aged children that involves a real or perceived power imbalance. The behavior is repeated, or has the potential to be repeated, over time. Both kids who are bullied and kids who bully others may have serious, lasting problems.

Bullying may be caused by unintentional mean acts or the acts may be clear-cut, intentional cruelty. 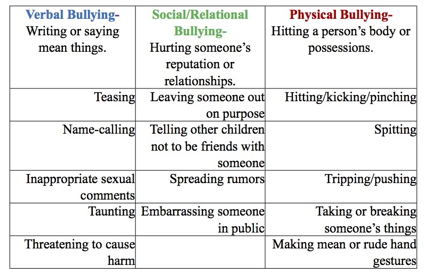 Where and When Bullying Happens

Bullying can occur during or after school hours. Most often, bullying occurs in locations where there is least adult supervision e.g. the playground, cafeteria, library, bathrooms.  It can also happen while travelling to or from school, in the youth’s neighborhood, or online.

There are many roles that kids can play. Kids can bully others, they can be bullied, or they may witness bullying. When kids are involved in bullying, they often play more than one role. Sometimes kids may both be bullied and bully others or they may witness other kids being bullied. It is important to understand the multiple roles kids play in order to effectively prevent and respond to bullying.

Why Cyberbullying is Different

There are many warning signs that may indicate that someone is affected by bullying—either being bullied or bullying others. Recognizing the warning signs is an important first step in taking action against bullying. Not all children who are bullied or are bullying others ask for help. These warning signs can also point to other issues or problems, such as depression or substance abuse. Talking to the child can help identify the root of the problem.

Signs a Child is Being Bullied

Look for changes in the child. However, be aware that not all children who are bullied exhibit warning signs.

Some signs that may point to a bullying problem are:

Signs a Child is Bullying Others

Kids may be bullying others if they:

Why don’t kids ask for help?

Statistics show that bullying was reported to an adult in only about a third of cases. Kids don’t tell adults for many reasons:

When adults remain unaware of bullying, they are not able to offer support, encouragement and help to stop the bullying behavior. Therefore, it is important that parents remain watchful of the aforementioned warning signs to cut bullying off at an early stage.

Parental awareness about bullying and helping children to understand what bullying is and how to develop a course of action for preventing or stopping the behavior is crucial. The effects of bullying can be devastating for children of all ages. Next week, we will examine some of the effects of long-term bullying for the victims and the bullies as well as some ways that parents can help their children with this issue.

Dr. Ritu Chandra is the founder of Preferred Medical Group, with locations at Phenix City Children’s and Fort Mitchell Clinic. She is a board-certified pediatrician and specializes in ADHD, asthma, and school-related problems.

« How to organize your closet… Without losing your mind!
Let There Be Art Celebration at The Columbus Museum »