Sign Up for Our Newsletter: Subscribe
You are here: Home / BLOG / Color Me RAD: a 5K for the whole family Color Me RAD: a 5K for the whole family

Historically, running has only been acceptable when trying to escape the law, personal responsibility, the truth, and grizzly bears.

I’m not an athletic person. Unlike my marathon-running sister, I am not fond of pounding the pavement. The open road does nothing for me — unless I’m driving my car. So when I first learned that the Color Me RAD 5K was coming to Columbus, my response was, “Meh!”

But my sister encouraged me to register. She even agreed to drive down from Atlanta to keep me company. I took her up on the offer, and wow — my family and I had a blast! 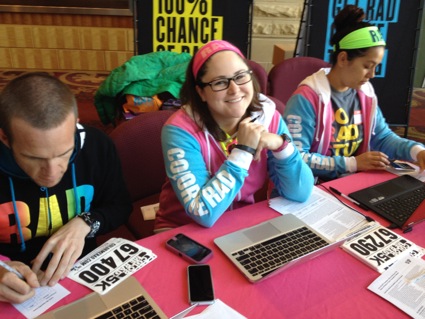 The registration process was quick and painless. I logged onto the Color Me RAD website and located the Columbus run. You could choose to participate as an individual or join a team. We joined “Team Trinity” — our friends at Trinity Episcopal.

The Friday before the run, my youngest accompanied me down to the RiverCenter to pick up our registration packets and bib numbers. The packets included our 5k entry, new 2014 Tour t-shirt, a pair of colorful sunglasses, a color pack, and free photos from professional photographers. The line was long, but moved quickly. Elizabeth Hurst with Uptown Columbus was onsite with her RAD team of volunteers, manning the tables and directing traffic. They had t-shirts, sunglasses, socks, RAD tattoos, and more great swag for sale. My little man saw the huge tubs of color bombs and begged me to purchase some. 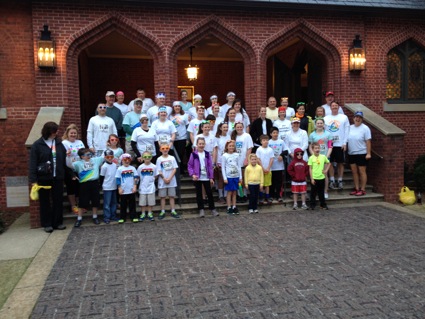 Bright and early on Saturday morning, we met up with the rest of “Team Trinity” downtown. The weather was cool, so we layered up with long-sleeves under our white, pristine t-shirts. My husband wore a backpack filled with bottled water and snacks. I wore a backpack with spare room for car keys, cell phones, jackets, and anything else that kids shed as they go.

After a group photo, we walked two blocks to Woodruff Riverfront Park where the race was slated to start. The music was thumping and the kids were beyond excited at the prospect of throwing color bombs at strangers… without getting in trouble for it!

Color Me Rad is loosely based on the Hindu Festival of Colors, otherwise known as Holi. The festive colors used are a sign of winter’s end and spring’s new beginnings. Or in the case of RAD; the color represents the end of lame runs and the beginning of fun runs. RAD is short for “Radical.”

(New in 2015 is color gel. It is also non-toxic, non-rash-inducing and will wash out with soap and water.) 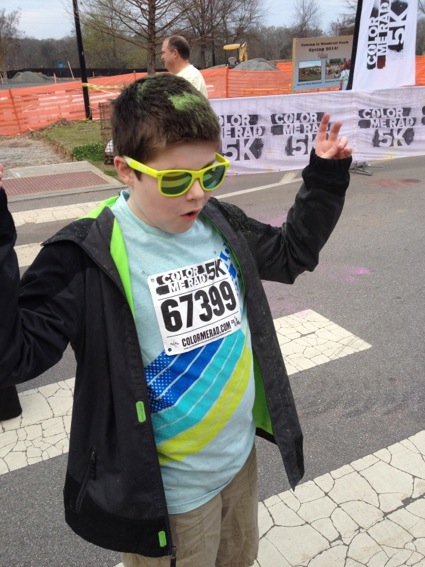 The 2014 Color Me Rad race attracted about 5,000 participants — far more than any other race in Columbus — all wearing pristine white t-shirts. Due to the number of participants, the start time was scheduled in waves of 10 minute increments. We were part of the first wave at 8 a.m.

All ages are welcome to participate. There were just as many walkers as runners. Plus we saw plenty of strollers. I lost count of how many kids were participating. Talk about a healthy, yet fun way to spend time with your family. There were smiles on everyone’s faces. Best of all, a portion of the proceeds from the event went to support Children’s Miracle Network at Midtown Medical Center. The race course began on the north side of Woodruff Riverfront Park (1000 Bay Avenue), headed north to 12th Street, then turned south on Broadway. The route proceeded down Broadway under US Hwy 280, past the Columbus Civic Center, where it looped and merged with the Chattahoochee Riverwalk. A water station marked the turn around point. The race then continued north along the Riverwalk, past the Coca-Cola Space Science Center and the Columbus Convention & Trade Center, before it ended at the southern end of Woodruff Riverfront Park. 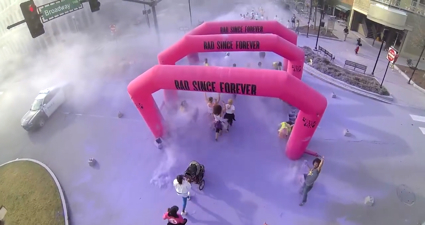 The Color Bomb stations were the best part. We passed through at least four “color stations.” At each station, volunteers covered us from head to toe in pink, yellow, green, blue, and violet. The volunteers at the green Color Station mixed water with the color bombs and used sprayers to hose everyone down. I was glad I wore my sun glasses!

The color bombs are gluten-free. They are made from non-toxic, non-rash-inducing, colored corn-starch. If you suffer from asthma or if you have concerns, be sure to check with your doctor and take any necessary precautions (safety goggles or a bandana over your nose and mouth couldn’t hurt).

(Color Me Rad’s 2015 Bigger, Badder, Radder tour features eight color stations, the most of any Color Me Rad race, including four powder stations, three gel stations and one liquid station.) 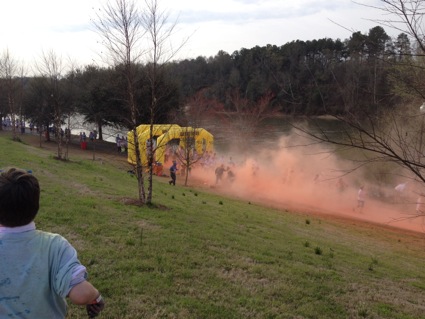 The race isn’t timed, which is fine, because most participants are there to have fun. By the time we crossed across the finish line, my boys were worn out and starving. Next time we’re bringing extra snacks with us!

After the race there was a lot going on at the finish line: Music, food, dancing, fun, and of course – COLOR! We even saw a group of soldiers dancing “Gungnam Style!” My family had a blast, and yes! We plan to do it again. What to know if you go: Children 7 and under run for free! They won’t receive any gear but they will be covered in color head to toe! If you would like them to have a t-shirt, race bib, color pack, and sunglasses then make sure to buy them a Kids Rad Pack. Ages 8 and older are full price. 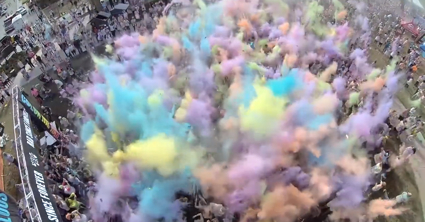 Are you ready for Color Me Rad? Join us on March 12, 2016, for the Biggest Raddest race yet! Use promo code UPTOWN to save 10% on your registration! Click here to register! http://tinyurl.com/n4y5khw